The House of Mumm Champagne

The Mumm brothers, Jacobus, Gottlieb and Philipp, who were from a rich family of German wine merchants and who also owned vineyards in the Rhine valley, arrived in Reims in 1827. Along with their business partner Friedrich Giesler, they set up P.A. Mumm et Cie., the initials standing for the forenames of their father, Peter Arnold Mumm. Georges Hermann Mumm, a descendant of the founders, took over the company in 1853. It became and has remained to this day G.H. MUMM et Cie. The first street address of the Maison Mumm was very appropriate: 14 Rue de la Grosse Bouteille, now Rue de Mars.

Mumm quickly established its reputation thanks to its style and quality.
The emblem of Mumm was the famous Cordon Rouge. Introduced in 1875, the Mumm emblem echoes the red ribbon of the Légion d'Honneur, In 1881 Cordon Rouge became the first champagne to arrive in the USA, inaugurating an export-oriented sales policy that has continued successfully ever since.

In 1882, Mumm began to build up its own vineyard estates to ensure a constant supply of the best grapes from the best soils. The first purchases were of sixty hectares (148 acres) in the Côte des Blancs, the commune of Cramant and at Avize. Mumm then installed seven traditional wooden wine presses in their vineyards. They are still in use today to ensure the continued quality of production.

As early as 1890, Mumm was enjoyed in all the royal courts of Europe. The courts of Austria-Hungary, Belgium, the Netherlands, Prussia, Denmark, Sweden, Norway and England, not to mention the Grand Dukes of Oldenburg and Hesse-Darmstadt, all appear in the Mumm accounts books of the 1890s.

In 1902 Mumm was the leading Champagne house, selling 3 million bottles, of which one million went to the USA. In 1955, G.H. Mumm & Cie took on a world-wide dimension with the arrival of the Canadian group Seagram. In 1999, Seagram sold Mumm to the American company Hicks, Muse, Tate & Furst. Then, the English group Allied Domecq (world n°2 in wines and spirits) purchased Mumm, thereby adding a prestigious house to the major brands they already owned.Today Champagne Mumm is present in over 100 countries. 40% of its production is sold in France, and 60% in export markets. Its energetic marketing strategy resulted in sales of close on 8 million bottles around the world during 2000.

The most natural way to celebrate joyful occasions and historic events, Cordon Rouge is the unrivalled symbol of champagne all over the world, A true classic with a unique character and irreproachably consistent taste, its name alone conjures up a whole world of flavour, All the richness and finesse of the Mumm vineyard is expressed in Cordon Rouge. In the late nineteenth century, this champagne was decorated with the famous red ribbon, as a tribute to the Légion d'Honneur.

In their new finery, the bottles were presented to Mumm's best customers. The decoration became the hallmark of one of the world's most renowned champagnes, Mumm Cordon Rouge! The robe: a fresh golden yellow with jade tints, an elegant stream of bubbles rising to form a rich, lively foam. The nose develops aromas of lemon and grapefruit, with notes of white peach, apricot and acidulous apple. Lingering notes of vanilla, dried fruit and honey.

The flavour: complex fresh fruit and caramel flavours are the mark of a great wine. A touch of acidity and remarkable length in the mouth make a consistently delightful finish.

77 wines make up this reference champagne. Well-structured, tonic, elegant and long, Cordon Rouge sums up the spirit, know-how and dynamism of the Mumm champagne house.

Pinot Noir (45%), rounded and full, structures this blend with strength and power. Fruitiness, liveliness and a rustic feel are provided by Pinot Meunier (25%).
Chardonnay (30%) gives this champagne all its finesse and elegance. 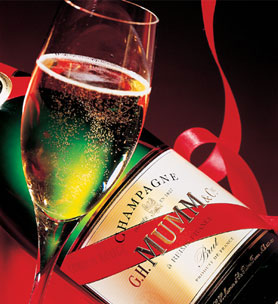 Featured Products
Wine Guides
Champagne Guides
Other Guides
The Mumm brothers, Jacobus, Gottlieb and Philipp, who were from a rich family of German wine merchants and who also owned vineyards in the Rhine valley, arrived in Reims in 1827. Along with their business partner Friedrich Giesler, they set up P.A. Mumm et Cie., the initials standing for the forenames of their father, Peter Arnold Mumm. Georges Hermann Mumm, a descendant of the founders, took over the company in 1853.